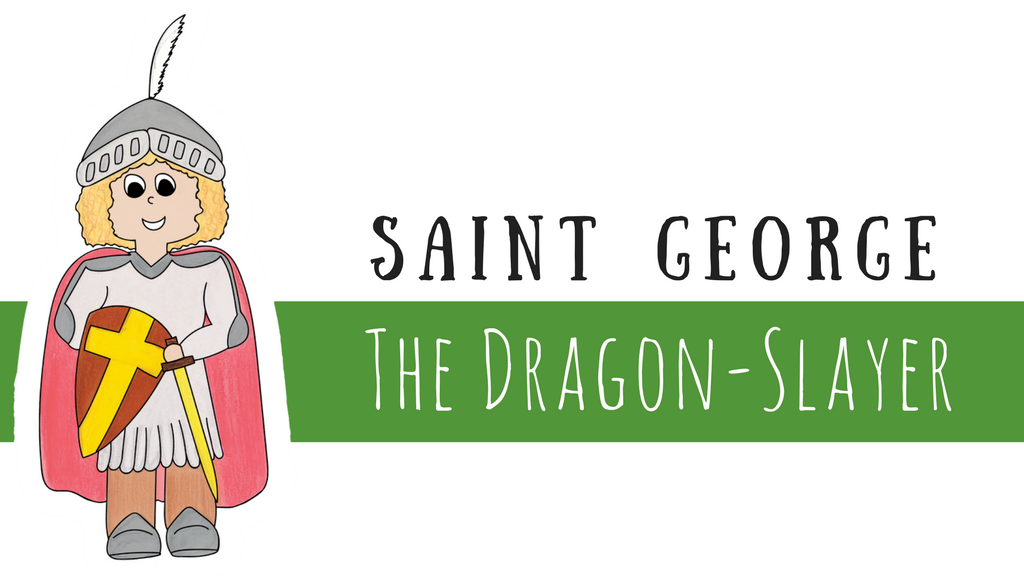 Saint George is a figure more of legend than of history but there seems to be no reason to doubt his existence.  He was especially venerated by the crusaders.  It is believed that he was of Greek and Palestinian origins and that both of his parents were Christians.  His father was an official in the Roman Army  but he died when George was only 14.  Then, a few years later, George’s mother died.

George became a Roman soldier in Diocletian’s army.  By the time he was in his late twenties, George became an official in Diocletian’s army.  On February 24, 303, Diocletian issued a proclamation that every soldier in the Christian army would have to sacrifice to the Roman gods.  When George saw the edict, he freed his slaves, gave all of his money to the poor, and prepared for what was bound to happen.  He then went before Diocletian and admitted he was a Christian.

Because Diocletian had been friends with George’s father he tried to convert George, offering him land, money, and slaves if he would only sacrifice to the gods.  George refused his offer.  Diocletian, when he saw that he was getting nowhere, ordered that George should be arrested.

The Legend of the Dragon

The legend of Saint George and the Dragon is the most popular legend and one that has made Saint George famous.  This legend began in the East but then it spread to Western Christian tradition by the crusaders.

According to the legend, a venomous dragon had taken up residence in Lybia.  This dragon lived in a pond in the countryside.  To prevent the dragon from hurting the city too, the townspeople offered it two sheep a day.  After a time, they began offering it a man and a sheep.  Finally, they began giving it their children who were chosen by lottery.  One time, the King’s daughter was chosen.  He tried everything to save her even offering all of his gold and silver, but the people would not accept it.  The princess was sent to the lake and the dragon dressed as a bride.

It just so happened that George arrived at the lake at the very same the princess did.  When the dragon came out of the pond, George made the sign of the cross and wounded the dragon with his spear.  He then ordered the princess to tie her belt around the dragon’s neck.  When she did so, the dragon became tame.

George led the dragon back to the city where all of the people were absolutely terrified of it.  George promised to kill the dragon if the townspeople converted to Christianity.  Legend has it that 15,000 men converted including the King.  George killed the dragon and then its body was carried out of town on four carts!!

The King built a Church to the Blessed Virgin Mary and Saint George on the site where the dragon died.  A spring flowed from the same site and its water cured all diseases.

Some legends indicate that George was martyred on April 2, 303, while some records indicate that he was martyred before the year 290.  He was canonized by Pope Gelasius I who said that George was a saint “whose names are justly reverenced among men, but whose actions are known only to God.”  Saint George is typically depicted as a knight on horseback, slaying the dragon with a spear.  His feast day is celebrated on April 23 and he is considered the patron saint of soldiers, boy scouts, and many countries.  You can help your children celebrate the feast of Saint George with our new Saint Stickers or a magnet!

I was looking for a quote to close this post as I have closed off all of my other ones.  As I was looking, I came across this one attributed to Benjamin Franklin:

Defer not thy well-doing: be not like Saint George who is always on horseback and never rides on.

Meaning no disrespect to Benjamin Franklin, I would like to say that Saint George did ride on.  He rode through legend and through history and through martyrdom and is now remembered and honored as a Saint for his courage in standing up for his faith.  Holy cards depicting a knight in shining armor, frozen in time, perpetually slaying the same dragon are not the true snapshot of Saint George.  His life ended in death, just like all of humanity.  What matters is what we defend while we are alive, and where we ride when we are gone.  During our lives, we all – men, women, and children – have the sacred honor and duty to defend what we believe in, to defend the truth, and to stand up for the faith, for freedom, and for life.  If we are faithful to that calling and to that duty, we will ride on to victory and eternal happiness, following in the footsteps of Saint George, who did ride on, showing us that courage can slay even the fiercest dragon.

“Courage isn’t having the strength to go on – it is going on when you don’t have strength.”  – Napoleon Bonaparte

“We also have a simple version of Saint George’s story for the kids. Plus a free coloring sheet!” – Theresa 🙂