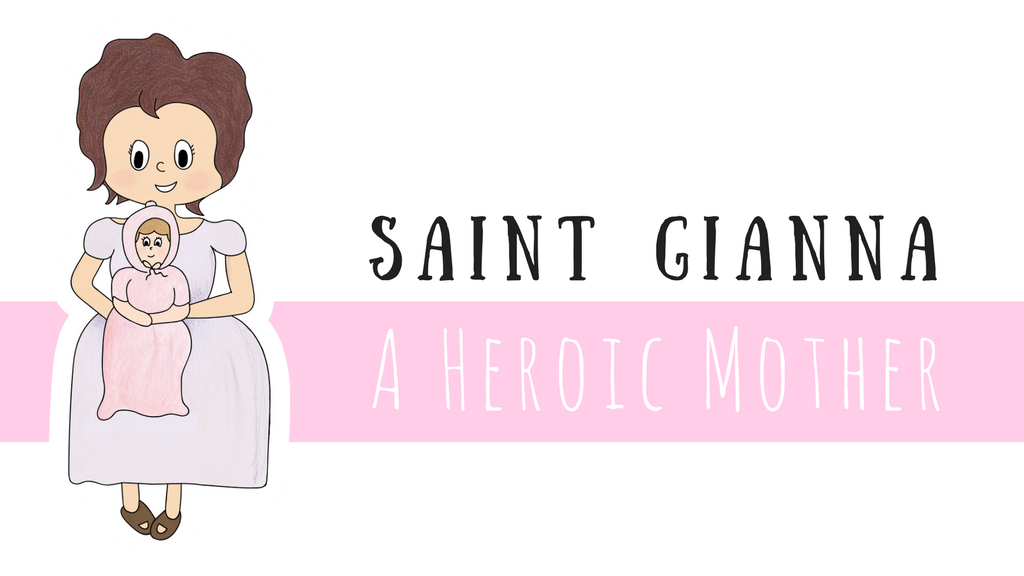 St. Gianna was born on October 4, 1922.  She was the tenth of thirteen children and had loving parents.  As a young girl, Gianna loved her Catholic faith and viewed her life as a beautiful gift from God.   She found great comfort in prayer and found it very effective and necessary.

Gianna decided that God was calling her to marriage.  She dedicated herself to “forming a truly Christian family.”  In December 1954, Gianna met Pietro Molla, an engineer who worked in her office.  They were engaged in April of 1955, and married in September of 1955.

Gianna was a happy wife  and she wrote to Pietro saying,

Love is the most beautiful sentiment that the Lord has put into the soul of men and women.

In November of 1956, the Molla’s had their first child, Pierluigi.  Maria Zita, their second child, arrived in December of 1957.  Their third child, Laura was born in July of 1959.  Gianna was a graceful and dedicated mother.

In 1942, Gianna began studying medicine in Milan.  She graduated with degrees in medicine and surgery in 1949.  She was a hard worker and dedicated to her work at the university and her Catholic faith.  In 1950, she opened a medical office close to her hometown.  In 1952, Gianna specialized in pediatrics at the University of Milan and from that time forward, she was drawn to serving mothers, babies, the elderly, and the poor.  She was a member of the Saint Vincent de Paul Society and as a part of this society she served the poor and the elderly.

Gianna considered medicine to be her mission in life.  She hoped to join her brother in Brazil where her help in medicine would be very beneficial for the poor women.  However, her chronic ill health did not allow her to go so she continued to practice in Italy.

In 1961, Gianna became pregnant with her fourth child, but during the end of her second month, she experienced a tremendous amount of pain.  She had cancer and was carrying a baby and a tumor.  The doctors told her she had only three options.  Two of the options would save her life but not the life of her unborn baby.  The third option would endanger her life and not allow her to have any more children, but it would save the life of her baby.

When it came time for Gianna to deliver her baby, she knew that she might lose her life, but she was more concerned about the life of her child.  She told her family:

If you must decide between me and the child, do not hesitate: choose the child.  I insist on it.  Save the baby.

On April 21, 1962, a healthy baby girl, Gianna Emanuela Molla was born.  The doctor tried many different ways to save both the mother and the baby, but Gianna died a week later on April 28, 1962.

Pope John Paul II beatified Gianna Beretta Molla on April 24, 1994 and canonized her on May 16, 2004.  Gianna’s husband and family, including her fifth daughter, Emanuela, were present at her canonization.  Pietro Molla was the first husband to witness his wife’s canonization.

A simple, but more than ever, significant messenger of divine love.

The Gianna Center in NY was the first pro-life Catholic healthcare center for women.  It was inspired by  the example of Saint Gianna.

You can help your children celebrate her feast with our Saint Gianna Beretta Molla magnet and saint stickers!

Saint Gianna Beretta Molla is a beautiful example of sacrificial love and the importance of giving no matter what the cost.  She is the patron saint of mothers, physicians, and unborn children and her feast day is April 28.

“As to the past, let us entrust it to God’s Mercy, the future to Divine Providence.  Our task is to live wholly in the present moment.”  – Saint Gianna Beretta Molla

“We also have a simple version of Saint Gianna’s story for the kids. Plus a free coloring sheet!” – Theresa 🙂