It’s hard for parents, and it’s hard for kids. Even children who are old enough to start understanding the mass often become bored and distracted. Even when you do have your child’s undivided attention, it can be hard to know what to say to help them understand and appreciate the mass and their faith.

As a result, mass time often becomes a rote part of our kids’ spiritual lives. We find other times to teach them about God and hope that they’ll magically start to love mass before they get to college.

What if our kids could follow along with the mass every Sunday? What if they were excited to do so? Not because of an activity or printable but because of something that helped them learn even more about the Mass as a whole?

We Figured Out The Answer

And we call it the Children’s Missalette. We figured out how to get kids to look forward to Mass, pay attention while they’re there, and actually learn about both the Mass and the liturgical year in the process.

Now, that’s a tall order. So let’s break down exactly how we’re doing it and how we know it works.

How The Children’s Missalette Works

A Missalette Designed for Kids

The beauty of the Children’s Missalette is that it’s more like an advent calendar than a Roman Missal. Any kid would prefer to uncover a surprise than crack open a thick book.

Every week, your child will open ten windows during Mass to uncover a picture/story card beneath. They get to open each window after completing an action like speaking, singing, kneeling, or watching along during Mass. Kids who’ve used the missalette are bursting with anticipation as they wait to see what the picture is. This method is awesome for kids and works way better than anything else we’ve seen.

A Story for the Liturgical Year

After Mass, your child can take out the story card with the picture they revealed during Mass and read about the feast day or aspect of the faith featured on that card. This is designed to help kids learn about and celebrate the liturgical year as it happens!

Finally, when they get home, it’s time to add the story card to their collection. The story cards will have two holes so they can easily be added their My Liturgical Year book.

The My Liturgical Year book’s starter set is made up of two loose-leaf rings and a cover page that you’ll receive at the start of your subscription. You’ll get a new starter for each liturgical year at Advent, the beginning of the liturgical year.

The routine of reading the story and adding the card to their collection will be one that your child will look forward to every week. We want your child to cherish these books for life. And one day, we hope they show them to their kids as the thing that helped them understand and fall in love with the Mass. That’s how much we believe in the Children’s Missalette.

The missalettes are designed to be easy peasy. Once a month, you’ll receive four or more missalettes. You’ll have what you need for every Sunday, plus holy days of obligation (based on the USCCB norms). Each will have the date on the front. You can stick them in the glove compartment of your car and pull them out when it’s time for Mass. On the back of each missalette is an explanation of when to open each window during Mass in case you need a reminder. But you don’t have to teach it to them or get them pumped up and ready for Mass. That’s what the videos are for.

The Children’s Missalette also features two short videos each week. A “Mass Muscles” video and a “Diving into the Mass” video. Each is about 5 minutes long. You’ll get an email with links to the videos a day or two before Mass.

Accompanying Video #1
The Mass Muscles video walks your child through the missalette for the week helping to build up “spiritual muscles”, hence mass muscles. It briefly explains each of the 10 featured Mass parts. It also prompts kids to actively participate during each part. Parents usually like to play this video just before they leave for Mass or on their way to Mass.

Diving Into Mass (Your Growing Library)

Accompanying Video #2
You can’t love what you don’t know. The Catholic Mass is rich with profound beauty and meaning. This video will teach your child about the Mass itself. Each week, they’ll learn about a different aspect. It might be a Mass part, items found in church, or some other Mass related topic. This video is a fun way to gradually teach children more about the Mass.

Subscribers to the Children’s Missalette will have ongoing access to these videos as a growing library of information about the Mass for kids. This library will be an awesome resource to go back to time and time again to review things about the Mass.

Example Diving into the Mass Video

The Children’s Missalette has a winning combo that we know works. The feedback has been amazing. It’s only made us more confident that this is the right answer for guiding kids through Mass.

I have 7 year old and 6 year old boys. My 6 year old has always groaned when it came time to go to Mass, and it broke my heart. Every. Single. Time.

My 7 year old is always excited to use The Children’s Missalette, too! He is learning so much about the Mass and is actually using words, like “gospel, homily, communion, petitions”.

The Children’s Missalette was exactly what I needed to help my children be excited about going to Mass, help them stay engaged during Mass, and teach them about our faith. I absolutely love it!

My family of 4 wiggly boys plus one toddler girl absolutely loved using the missalettes during mass. They paid closer attention and my older participated in the songs and responses so much more.

We absolutely loved them and can’t wait to use them again.

We loved that the Children’s Missalette has a simple and reverent design and focuses on what is happening in the mass rather than just distracting them. They were more engaged and actually following along with the mass.

It made the parts of the mass easier to understand and be a part of. Best of all, they were excited to go to mass! Celeste (8), Joseph (6), Caleb (3)

I have never seen my 5-year-old twins so engaged at mass as they were while using the Children’s Missalete! Thank you! 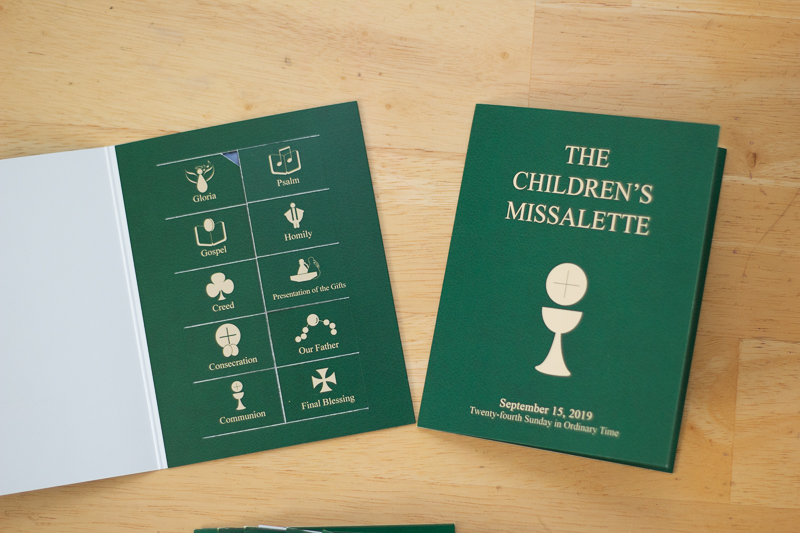 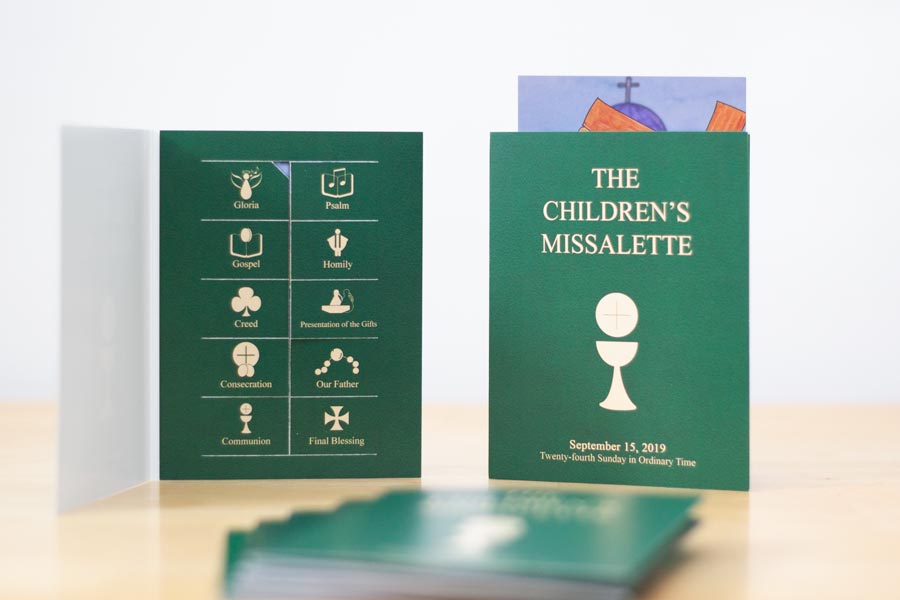 What month am I signing up for if I sign up today, and when will I be charged?

What ages is the Children’s Missalette for?

Does the Children’s Missalette work with the Latin Mass or other special situations?

When and how will I get the videos?

How does the “My Liturgical Year” book work?

How do I cancel my subscription? 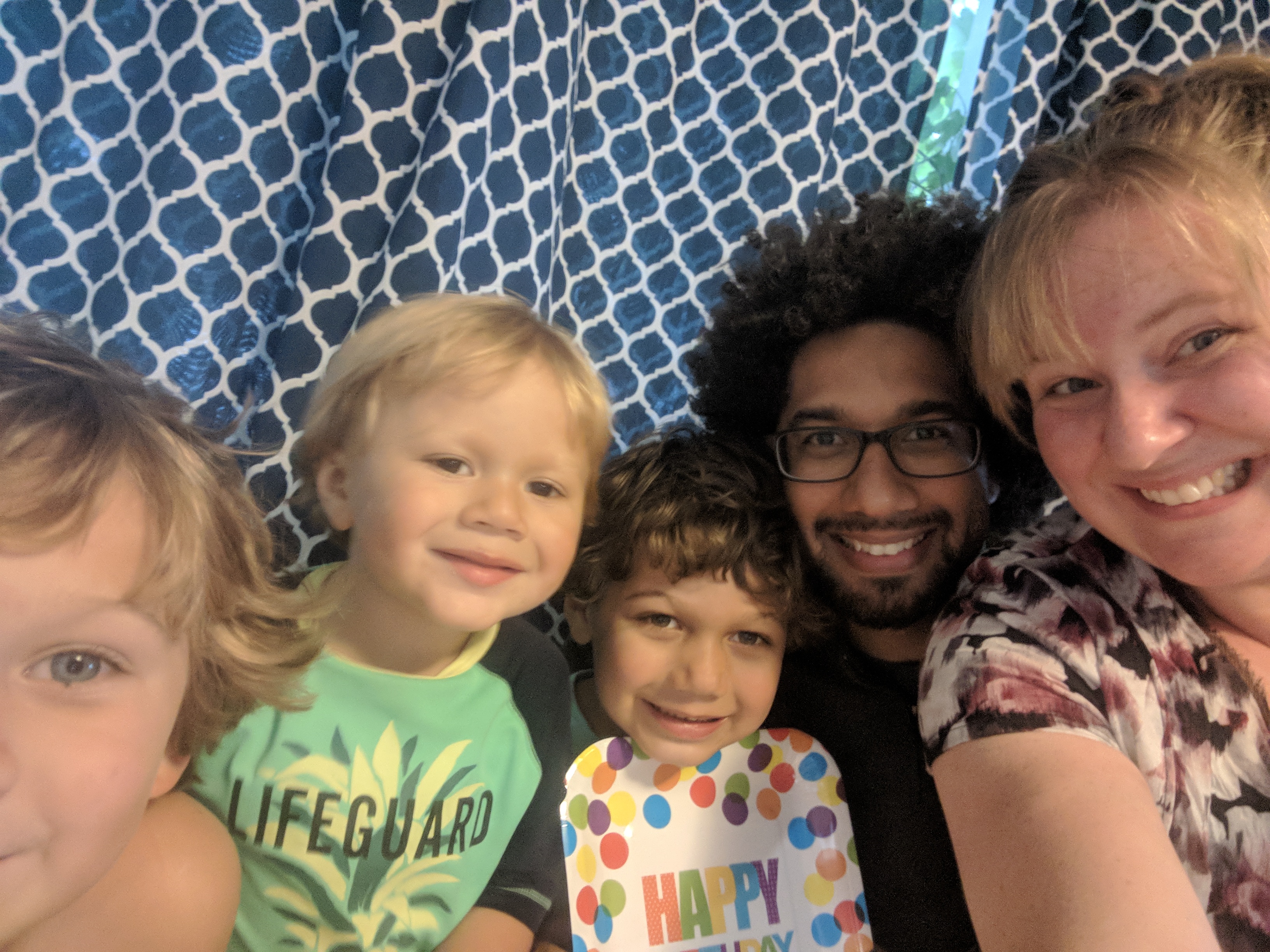 About My Catholic Kids

We’re Theresa and Charles Pobee-Mensah. Our goal is to create a passionately Catholic company that will make fun and unique products that will grow up with your kids. We’ve done three successful Kickstarter campaigns and have created a bunch of great products for Catholic kids that we’re super proud of. The Children’s Missalette is in good company.

Theresa has always been passionate about finding exciting ways to bring the Catholic faith to life. Naturally, she studied Communication Arts at Franciscan University of Steubenville and spent almost the next decade working there. Charles received his Masters in Theology at Franciscan.

Together we’re the perfect team! Charles has all the theological and technical knowledge, and Theresa make our projects fun and understandable for kids!

The Children’s Missalette is the culmination of a lot of thinking, planning, and designing all around how to get kids to better experience the Mass. We’ve tried lots of different things over the years, and we’re so extremely excited to finally have what we think is the ultimate solution for Kids.

We use fun and imaginative ways to help parents teach their children about the Catholic faith. This is what we do. Thank you for helping to bring the Children’s Missalette to life. We wouldn’t be able to do what we do without you.

Questions or comments about the Children’s Missalette? Please email us at charles@mycatholickids.com.

Watch Our Interview on the Extaordinary Mission Pocast!