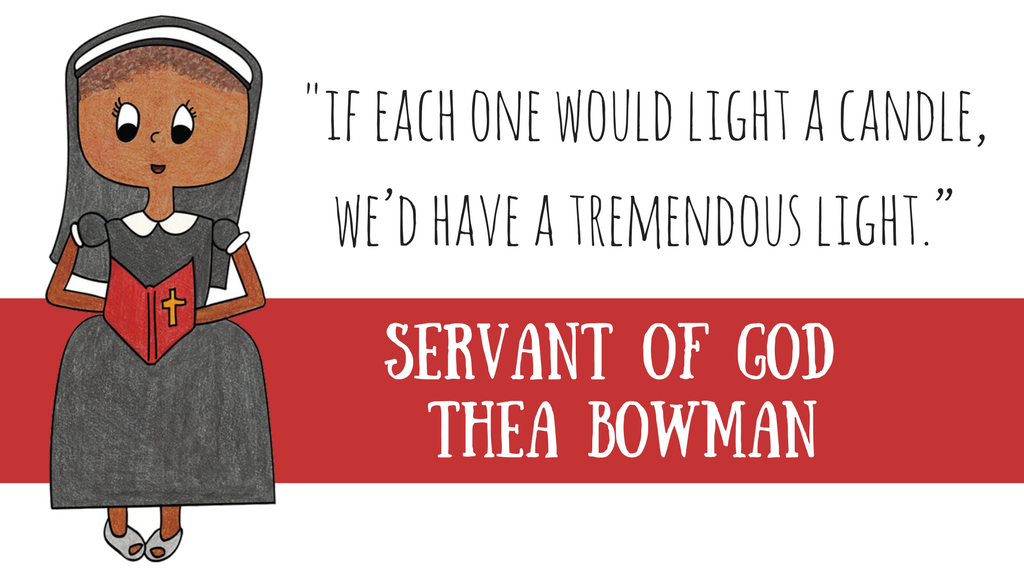 The Early Life of Thea Bowman

Bertha Elizabeth Bowman (known as Thea Bowman) was born on December 29, 1937 into a Methodist home in Mississippi.  Her grandparents were slaves, but her father was a physician and her mother was a doctor.  Throughout her life, Thea truly lived up to the meaning of her name: Thea means “godly” or “of God” and Bertha means “bright one.”

Thea was determined, smart, and lively.  When she was 9 years old, she asked her parents if she could become a Catholic and they gave their consent.

At the age of 15, Thea entered the Franciscan Sisters of Perpetual Adoration in La Crosse, Wisconsin.  Her parents, who in time also became Catholic, were not pleased at first, but eventually gave their permission.  Thea’s father did not want her to lose her African-American identity but she never did!  Sister Thea was the first African-American to join the order and her sisters soon grew to love her. Your children can celebrate Sister Thea with her magnet, sticker, and coloring sheet!

Sister Thea became the first African-American woman to receive a doctorate in Theology from Boston College in Massachusetts.

Once she finished her schooling, she worked as an elementary school teacher and a high school teacher.  She eventually went on to teach at Viterbo University, CUA, and Xavier University.

“I Will Sing My Works to the King”

These lines from a piece sung by the Carmelite Sisters of the Most Sacred Heart of Los Angeles beautifully describe Thea’s mission.

Sister Thea loved music and had a beautiful voice.  She greatly impacted liturgical music as she strove to develop a unique way of worship that integrated African-American culture and Catholicism.  Thea believed that Catholicism could help heal the tension and brokenness by celebrating the differences that exist between races.

In 1987, Lead Me, Guide Me: The African American Catholic Hymnal was published.  Thea helped select some of the hymns that were included.

Through music, Thea helped to bring many people closer to Christ and Catholicism.  She united faith and culture in a beautiful and enlightening way.

Throughout her life, Thea strove to help all people understand the beauty and treasures present in the African-American culture and heritage especially through song, dance, poetry, and drama.  Thea’s personality exuded joy, freedom, and pride in her heritage as she fought injustice, prejudice, suspicion, and hatred.  She spent her life fighting for God, against any evil that caused division, and for unity between His people.

In 1984, Thea was diagnosed with bone cancer.

“Part of my approach to my illness has been to say I want to choose life, I want to keep going, I want to live fully until I die.”

In 1989, Thea was given an honorary doctorate in Religion by Boston College in Massachusetts.  In June of 1989, from her wheelchair, she spoke about what it meant to be black and Catholic to the United States Conference of Catholic Bishops.

Less than a week before her death, Notre Dame University announced its intention to present Sister Thea with the Laetare Medal, the highest honor given to American Catholics.  They honored her posthumously in May 1990.

Thea Bowman died on March 30, 1990 at the age of 52 in Canton, Mississippi.  People from around the world attended her funeral and she was buried in Memphis, Tennessee together with her parents.  Her cause for canonization is now open, and she is a Servant of God which is the first step to becoming a Saint!

Thea Bowman is remembered as a remarkable sister, teacher, and scholar.

“I think the difference between me and some people is that I am content to do my little bit.  Sometimes people think they have to do big things in order to make change.  But if each one would light a candle, we’d have a tremendous light.”

Servant of God Sister Thea Bowman, pray for us!

Help your children celebrate Servant of God Sister Thea Bowman with her mini story and magnet!