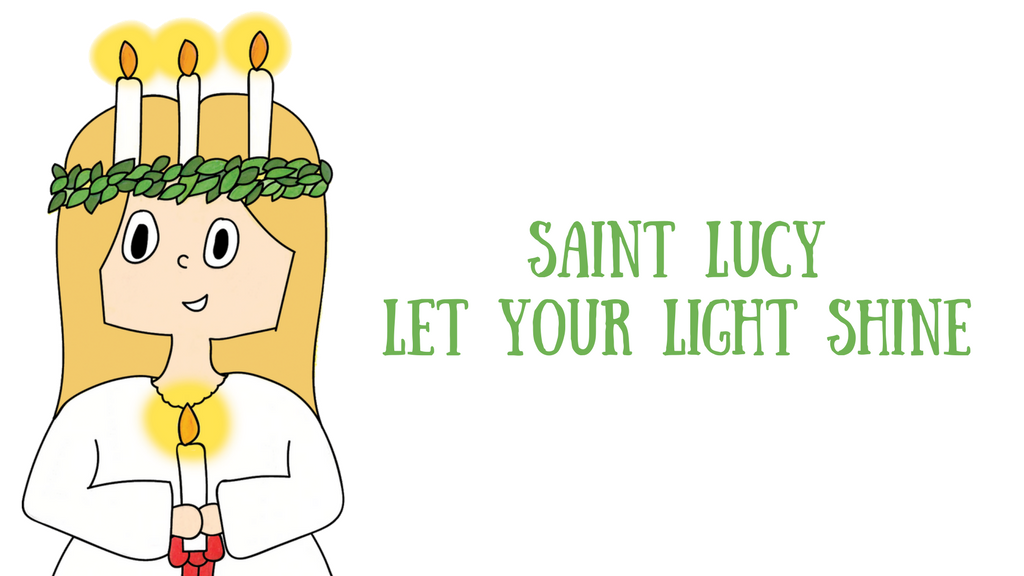 Who is Saint Lucy?

Much of what we know of Saint Lucy is buried in legend.  It is very hard to tell what is true and what is not.  Lucy was a Christian from Syracuse, Sicily.  She lived with her mother, Eutychia, since her father died when she was young.  Her family was supposedly wealthy and her father may have been Roman.  Eutychia did not know that her daughter had made a vow of virginity and so she tried to convince her to marry a pagan man.  In some stories, Eutychia actually arranged for Lucy to marry a nobleman.  Lucy postponed the marriage as long as she could.  During this time, Eutychia became very sick and so both mother and daughter went to pray at the tomb of Saint Agatha.  Through a miracle, Eutychia was cured!

Lucy eventually told her mother about her vow and Eutychia stopped pressuring her to marry.  The rejected nobleman was furious and he told the governor that Lucy was a Christian – which was a crime at the time and the persecution of the Emperor Diocletian was going strong.  Lucy was brought into the court and the soldiers were going to take her to a bad place but God made her unmovable – the guards could not move her at all not even with a team of oxen!  They even tried to burn her but when that did not work, she met her death by the sword.  Saint Lucy is said to have died sometime in the early fourth century – probably 304 A.D.

The Bearer of Light

So, why is Saint Lucy usually pictured holding her eyes?  Legend has several different explanations.  One legend says that the Governor ordered the removal of her eyes as a punishment.  Another legend, however, says that Saint Lucy took them out herself because the man she was supposed to marry really admired them.  At the time of her burial, her eyes returned more beautiful than before!

Because of these legends, Saint Lucy is the patron saint of the blind and of those with eye disorders.  Her name means light or bringer/bearer of light and most art portrays her holding a palm branch as a symbol of her martyrdom and a little plate or cup with her eyes inside.  Saint Lucy is also the patron saint of Syracuse, Sicily.  On her feast day, a silver statue with her relics is carried throughout the streets.

By the sixth century, the whole Church acknowledged her courage in defending the faith.  She was recognized as a Saint before canonization was an official church practice and her name is mentioned in the first Eucharistic Prayer of the Mass.

Saint Lucy’s feast day is December 13 and there are many ways to celebrate this feast around the world.  While she was still alive, Saint Lucy would travel to the catacombs to give supplies to the Christians hiding there.  In order to leave her hands free to carry the supplies, it is believed she wore a wreath on her head with candles to light the way.  Most Saint Lucy Feast Day traditions stem from this legend.

At one time, her feast day was the same day as the winter solstice – the longest day of the year.  This is significant because her name means light.  Saint Lucy’s Day is a feast of light and reminds us that the coming of the Light of the World is very close!

The most popular tradition that is celebrated in many countries but mainly in Sweden is that of a young girl or lady dressed in a white dress (for purity) and a red sash (for martyrdom) with a wreath of candles on her head.  In some countries there are processions and cookies are distributed.  The most traditional dish is that of saffron buns, which appear to be shaped in the form of two eyes.  In other forms of the tradition, the girl rises before her family and serves them all cake or some other special treat.

“This Little Light of Mine”

Let it shine!  That is one lesson Saint Lucy can teach us.  No matter where we are, we should bring the light of Christ to all those around us.  Each one of us has a different kind of light – the light of our gifts and personalities, and the light of Christ shining in each one of us.  Our light, as the gospel says, was not meant to be hidden underneath a bushel basket.  We must share the light with others so that they will not remain in the darkness.

“Darkness shall take flight soon from earth’s valleys.  So she speaks wonderful words to us: A new day will rise again from the rosy sky….  Santa Lucia, Santa Lucia!

Saint Lucy, virgin and martyr, please pray for us!