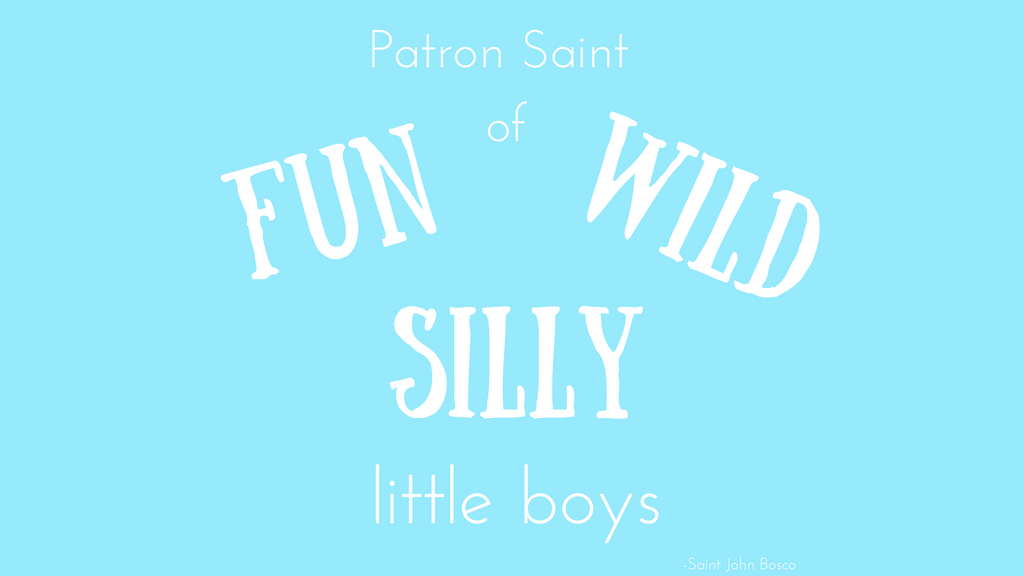 Saint John Bosco was born on August 16, 1815 into a poor family.  He was the youngest of three boys.  Mr. Bosco died when John was two and he was raised by his mother, Margaret.

John spent most of his time in Church, growing food, and raising sheep with his family.  Even though they were poor, Margaret always helped those less fortunate.

John had many dreams throughout his life.  When he was nine, he had one that was especially life-changing.

In this dream, there was a crowd of boys, laughing, playing, and swearing.  John tried to stop the boys by fighting with them.

Then, a man appeared (Jesus) and told John,

“You will have to win these friends of yours not by blows but by gentleness and love.  Start right away to teach them the ugliness of sin and the value of virtue.”

When John asked him how he would find the wisdom to lead these boys and to do the impossible the man replied,

“I will give you a teacher.  Under her you will become wise.”

“In good time you will understand everything.”

Journey to the Priesthood

One day, John saw a group of circus performers.  He began practicing the entertaining magic tricks he saw them perform hoping that he could then use these to attract others and hold their attention.

John began putting on shows, reciting homilies he heard at Mass, and inviting those in attendance to pray with him.

He began thinking about the priesthood which seemed an impossible dream because of his poverty and lack of education.  A kind priest taught him a little and gave him a few books.  Despite his older brother’s objections, John eventually left home at the age of 12 and found work.  Another priest became his guide and friend, helping, teaching, and supporting him.

Father Bosco, or Don Bosco, disapproved of corporal punishment, instilling a sense of duty and virtue instead.  He encouraged frequent reception of of the Sacraments and daily Mass, guided children in a fatherly way, and united spirituality with work, study, and play.

Don Bosco’s work with boys began with one orphan and gradually expanded.  During his visits to prison to minister to the inmates, he noticed many young boys in jail.  He began to attract boys in the streets, primarily the children of the poor and orphans, by using magic tricks, attempting to keep the boys out of jail.  He also fought for the rights of apprentices and encouraged many of his boys to consider the Priesthood.

Don Bosco’s mother eventually came to help him, and became known as “Mama Margaret.”  In 2006, Pope Benedict XVI declared her a Venerable!

In 1859, Don Bosco started the Oratory of St. Francis de Sales for boys. This Oratory allowed him to keep the boys out of trouble.  Despite objections from parish priests and even the Chief of Police, Don Bosco kept going.

Don Bosco’s success lay in his gentleness and his ability to see through the poverty and dirt, into the hearts and souls of the boys he helped.  One of Don Bosco’s boys is a Saint many know well: Saint Dominic Savio.

“It is not enough that you love the young; they must know that they are loved.”

The Salesian motto is simple: “Give me souls, take away the rest.”

Pope Pius XI, who knew Don Bosco, beatified him on June 2, 1929 and canonized him on April 1, 1934.  Saint John Bosco is the patron saint of apprentices, boys, editors, publishers, schoolchildren, the youth, and magicians.  He earned and deserved the title, “Father and Teacher of Youth.”

“I want to give you the formula for sanctity; first, be happy; second, study and pray; third, do good to everyone.”

Saint John Bosco, pray for us!