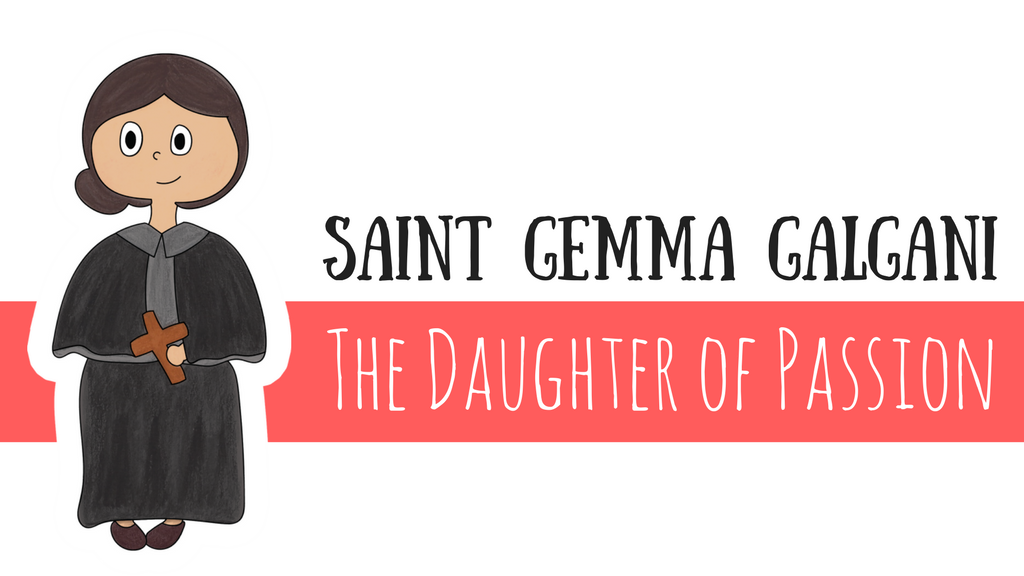 Gemma Galgani was born on March 12, 1878 in a small, Italian town.  She was the fifth of eight children.  Gemma was quiet and reserved but she had a smile for everyone and a great love for prayer.  She was even allowed to receive her First Holy Communion early when she was 9 years old.  Gemma was a good student, loved by her teachers and schoolmates.  She was a very intelligent child who excelled in French, math, and music.  However, Gemma had to quit school because of her ill health.

On September 17, 1885, when Gemma was about 7 years old, her mother died of tuberculosis.  Gemma’s father died when she was 18 or 19 and she became a mother to her seven brothers and sisters.  She also had a great love for the poor and she helped them in any way she could.  You can help your children celebrate this feast with our new Saint Stickers or with our Saint Gemma magnet!

“The Daughter of Passion”

Gemma was known as “the daughter of Passion” because of her profound imitation of the Passion of Christ.  She suffered a great deal but she offered all of her suffering to God.  Gemma was offered several marriage proposals but she refused them because she preferred silence and retirement.  She desired only to pray and speak to God.

Gemma really wanted to become a Passionist nun but she wasn’t accepted because of her ill health.  When she was 20, Gemma was diagnosed with spinal meningitis.  Her one regret was the trouble everyone went through to take care of her.  Eventually, she was miraculously healed.  She attributed her miraculous healing to the Sacred Heart of Jesus through the intercession of the Passionist saint, Saint Gabriel of Our Lady of Sorrows, and Saint Margaret Mary Alacoque.

Gemma also mentioned that she sometimes spoke with her Guardian Angel, Our Blessed Mother, and other Saints, especially Saint Gabriel of Our Lady of Sorrows.  According to her account, she received special messages from them about present or future events.  She saw her Guardian Angel often and would send him on errands to deliver letters or messages to her confessor in Rome.

The Wounds of Our Lord

On June 8, 1899, when she was 21 years old, Gemma had a feeling that something special was going to happen.  It was the eve of the Feast of the Sacred Heart of Jesus.  She began to experience pain in her hands, feet, and heart.  Blood began to come from all of the places where there was pain.  She had been given the special grace of the stigmata – the marks of Christ’s Passion.

Gemma had the stigmata until about 3 years before her death.  Because of her declining health, her spiritual director asked her to pray that she no longer be gifted with the stigmata and her prayers were answered.  Many of the people around Gemma during her lifetime, did not believe that she really had the stigmata.  They thought she was crazy and made it all up.  Even her spiritual director had his doubts, but eventually, he became convinced of the authenticity of her mystical life.  After her death, he collected all of Saint Gemma Galgani’s writings and wrote a detailed biography about her.

In January 1903, Gemma was diagnosed with tuberculosis.  Her health declined rapidly especially on Good Friday of that year.  She died on April 11, 1903, Holy Saturday, at the young age of 25, in the company of her Parish Priest who said of her death,

“She died with a smile which remained upon her lips, so that I could not convince myself that she was really dead.”

Saint Gemma Galgani’s feast day is on April 11, but the Passionists celebrate it on May 16.  She is the patron saint of students, those suffering from back pain, back injury, headaches and migraines, those struggling with temptations to impurity, those seeking purity of heart, those who have lost their parents, and pharmacists because her father was a pharmacist.

“I wish, oh Jesus, that my voice could reach to the ends of the world, to call all sinners and tell them to enter into Thy Heart….  Oh, if only all sinners would come to Thy Heart…! Come! Come sinners, do not be afraid! The sword of Justice cannot reach you Here!”  Saint Gemma Galgani

“We also have a simple version of Saint Gemma’s story for the kids. Plus a free coloring sheet!” – Theresa 🙂