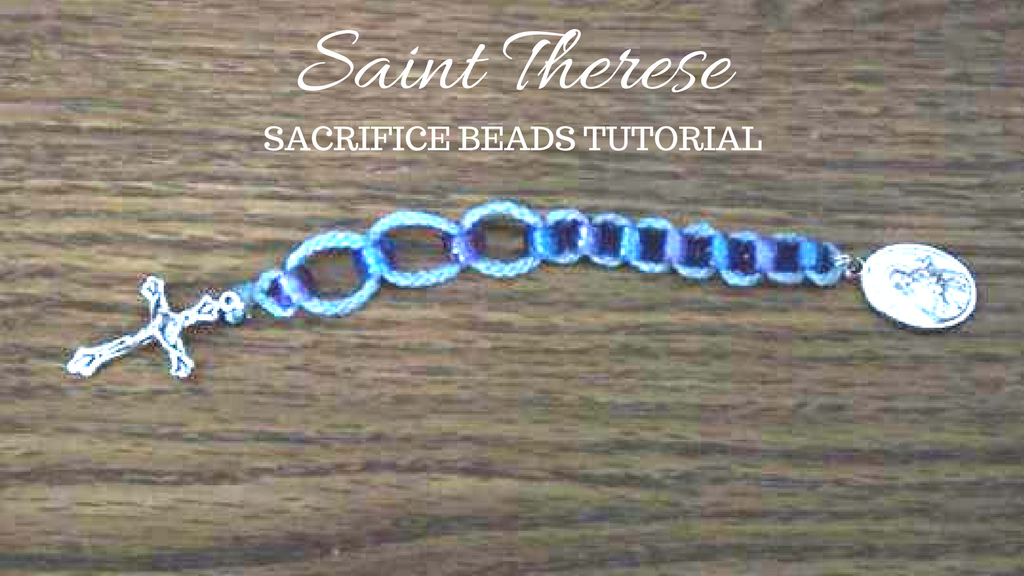 Sacrifice Beads are a simple and easy way help children learn to offer up their smallest deeds for love of God.  Saint Therese saw every little deed of hers as a staircase by which she could “climb” to Heaven – one small step at a time.  God accepts even the smallest things we do, because the greatness of our actions is nothing if we do not have love.

By counting their good deeds, children may learn to be more conscientious about their actions and intentions.  Placing ten beads on the Sacrifice Beads allows them to double as one-decade rosaries also.

Teaching children to make Sacrifice Beads is simple, easy, and may help to draw them in.  They may be more eager to use something they helped make themselves, versus something that was made for them.

When Saint Therese was a little girl, she used Sacrifice Beads to count her acts of love for God.  Every little deed of love and sacrifice is seen and loved by God, no matter how small they are.

+Burn both ends of the cord to avoid fraying.  Hold the end of the cord close to the flame for a few seconds and then tap the area gently and quickly until you have a firm needle.

+Thread the medal of Saint Therese onto the center of the cord.

+Thread one end of the cord through the first bead and then thread the other end through the opposite side of the same bead.

+Make sure to keep the bead centered by holding the ends of the cord together while pushing the bead down towards the medal.

+Repeat step three until all ten beads are in place.

+Thread both ends of the cord through the ring of the crucifix.  Pull it towards the beads, leaving a distance of about an inch between the beads and the crucifix.

+Take the ends of the cord and fold them under and to the right of the crucifix.

+Thread both ends of the cord through the loop that is created.

+Hold the crucifix in place and pull carefully but tightly, creating a firm knot.  The crucifix may sit a little crooked at first, but will straighten out with time.

+ Cut the cord close to the knot, leaving a distance of about a few millimeters to allow for burning.

+Ask a priest to bless your Sacrifice Beads and then you can start to use them!  Remember to offer up all your actions for love of God.

Ask God and Saint Therese to help you along the little way to holiness.

You can read more about Saint Therese of Lisieux here. We also have a special short story for little children about her as well as a magnet and a free coloring page.  There is also a sticker of Saint Therese included in the Saint Stickers Multipack.

Saint Therese, please pray for us!