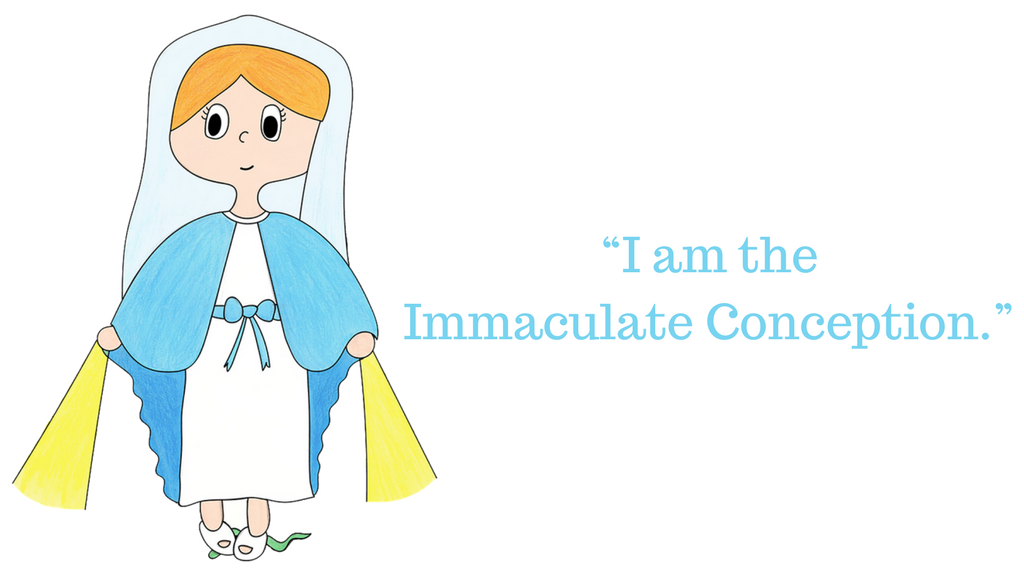 The Solemnity of the Immaculate Conception, December 8, is a Holy Day of Obligation in the Catholic Church.

In order to become the mother of Christ she was conceived free from the burden of original sin.

Saints Joachim and Anne prayed for a child for a very long time.  Just when they had begun to lose hope, Saint Anne became pregnant with Mary.  In order for Mary to become the mother of Christ, her soul never suffered the effects of original sin.

Tradition has it that the Eastern Church first celebrated the feast on December 9, as the “Feast of the Conception of the Most Holy and All Pure Mother of God” as early as the fifth century.

As the feast spread throughout the Eastern Church, the focus was more on Saint Anne and became known as “The Conception of Saint Anne, the Ancestress of God.”  It took a long time for the celebration of the Feast of Mary’s Immaculate Conception to spread.  During the eighth century it spread to the Western Church and began to be celebrated on December 8.

The feast received its present name in the eleventh century and became a feast for the whole Church during the eighteenth century.

Pope Sixtus IV, on February 28, 1476, extended the feast to the whole Western Church and in 1483, he threatened to excommunicate anyone who opposed the doctrine of the Immaculate Conception.  During the seventeenth century, a lot of the opposition to the doctrine had died out in the Catholic Church.

On December 8, 1854, Pope Pius IX, in an apostolic constitution known as Ineffabilis Deus, infallibly specified the importance of the doctrine of the Immaculate Conception declaring it a dogma:

“We declare, pronounce, and define that the doctrine which holds that the most Blessed Virgin Mary in the first instance of her conception, by a singular privilege and grace granted by God, in view of the merits of Jesus Christ, the Savior of the human race, was preserved exempt from all stain of original sin, is a doctrine revealed by God and therefore to be firmly and constantly believed by all the faithful.”

Pope Pius IX did not change the doctrine through this proclamation; he simply defined the doctrine in an official way.

Our Blessed Mother is the new Eve and the mother of the new Adam.  She was the pure instrument through which the Savior of the human race would come into the world.

Saint Thomas Aquinas called Mary the “holiest of all creatures.”  Many of the saints had a great devotion to the Immaculate Conception.  Saint Maximilian Kolbe was one of them and he said: “He who loves the Immaculate will gain a sure victory in the interior combat.”

“I am the Immaculate Conception”

When Our Blessed Mother appeared to Saint Bernadette Soubirous in 1858 she told her, “I am the Immaculate Conception.”

Just as she appeared at Lourdes, Mary is usually portrayed as a young woman, dressed in white, with a blue sash or mantle and a halo of stars.  She is often shown standing on a hill and sometimes there are clouds, angels, and flowers shown as well.

There is a magnet of Our Blessed Mother and she has a sticker also in the Saint Sticker Multipack!

A Feast Around the World

In Guam and the Philippines (and other countries as well), the Solemnity of the Immaculate Conception is a public holiday.  It is also a public holiday in Panama, where December 8 is also Mother’s Day.  In many churches around the world, special Masses and services are held to commemorate the feast.  In some places, the feast is celebrated with parades, fireworks, and songs.

There are many beautiful ways that the Solemnity of the Immaculate Conception can be celebrated.

One way is to place a blue tablecloth on the kitchen table and pray the Canticle of Mary: The Magnificat before meals or throughout the day.  Cupcakes or a cake decorated with blue icing and sprinkles would be a sweet addition.  Flowers can be placed in front of a statue of Mary.  A fun activity might be to buy white carnations several days before the feast day or right before.  Place the flowers in a jar and put blue food coloring in the water.  Over time, the flowers (sometimes just their edges) will turn a soft shade of blue.  On this day it would be special to make time to pray the Rosary as a family.  Making Rosaries together is a fun activity as well.

“Mother of Christ, Mother of Mine”

On the Cross, before He died, Jesus gave Mary to us as our mother.  She is the mother of God and our mother also.  She takes care of us and loves us as the dearest, gentlest, and purest mother.

Immaculate Mary, your praises we sing, you reign now in splendor with Jesus our King!